It is a software to:

It is build over the concept of repository that is a kind of register of all the changes of a set of files. Usually the information is stored as a hierarchy of files (like a tree file-system). Now this repository allows connections of several clients. They can read and write so the version control system should be able to track who, and when, make changes on the files, and give to other users the possibility to read those changes.

All people who is working with computers and making progressive changes over files in a project. However the main advantage of the version control system is when several clients are working on improve/change the same project.

When several users are working with the same set of files at the same time, the version control software should be able to allow changes but without deleting or incorrectly mixing the changes of the users. For this there are several solutions that depend on how is designed the version control. In those cases where we have a central repository we can allow only one person to change at one time the same file, the other possibility is that all users create a personal copy of the central repository and commit changes. This last process is build over the concept of merge code. This is something that many users are doing (in a not so clean way) when they make several copies of a code to test several changes but they want to preserve the original copy. Version control gives them a more clean a beautiful method to perform all this tasks even if the are just one single user of a given project.

The method might depends on the specific version control software. In the case of SVN (subversion) there is a central repository and several working copies. Every time that a user commits changes on the code (using a SVN client) the SVN server creates a new state of the file-system tree (that is, the repository) named revision. Each revision has assigned one unique number (natural number). Note that in SVN each identify number refers to a full state of the file-system (not to a specific commit of a specific file). It is like a instantaneous-photo of the full set of files. In this situation every working copy is private and only the process of commit the changes make them public (open to other users). This is the so named Central Version Control System (CVCS). Other version control systems are based on distributed or decentralized systems, examples are git and mercurial. 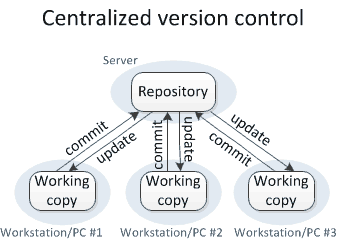 It is one of the most used version control systems. Currently it is a project of the Apache Software Foundation htts://subversion.apache.org/

An example with svn

It is very easy to use svn (subversion) from the terminal. If you have correctly installed svn in a Linux/Unix machine you can follow this example:

First, lets imagine that you wanted to download the last version of a nice open-source code. In my case, I wanted to download and compile from the source a chess-program called scidvspc. I checked that it is a sourceforge project and then it is very easy to obtain a working copy from the official repository.

Now in your directory test_svn you have a new sub-directory named: scidvspc-code that replicates the online repository stored at sourceforge.net server. Let’s try something:

Probably nothing is now returned, this is because simply there is nothing new to report, but as we have seen if we use the command svn in a directory that is not the working copy of a repository svn will complain. Now let’s change a file. For instance in README.txt I have changed some lowercase letters to uppercase.

And, yes!, it detected that we have changed README.txt. But this change is only effective in our private working copy. Nowbody knows that some lowercase letters were changed to uppercase letters. Let’s try:

Now we begin to see the advantages of version control, we can see exactly the changes with just one command. Let’s say now that we have created also new file. For instance I have created a file called: THANKS.txt with the text ‘Thank you for create this nice software.’

SVN indicate us that there is a new file in the working copy but its status is unclear. SVN knows that this file is not in the main central repository but don’t know if we want to add it or not.

So we have Added a file to the project and we have Modificated another file. If we would think that these changes are convinient we could commit the changes with svn commit -m 'Added a file to say thank you'. Then we will see something like…

The -m command indicates the message that we want to include as information of the new revision, while XYZ is the revision number (that, remember is a unique number describing a full status of the project). Usually our commits will be validated (or not) by a developer holding the project if they are useful (or useless). On the other side, as users, we can try to update our working code to the last revision, but first we can check the status of our version. In this case I will suppose that we have commit our changes to the server and now other user would like to have this revision:

The + means changed in the repository while XYZ and (XYZ-1) are the revision numbers of the last change and the previous one. If the new user think that these changes should be incorporated to her/his working copy then…

… and her her working copy is update with our changes.